San Bernardino County in Southern California was looking for its next-generation visualization and control system for its landfills. Piloting the San Timoteo Landfill allowed SCS Remote Monitoring and Control (SCS RMC) and Corso Systems to provide major upgrades, use a flexible, scalable platform including Ignition 8 and Ignition Perspective, and integrate next-generation options such as 3D imaging from drones and virtual reality (VR).

The San Timoteo Landfill was the pilot project in what has become a major upgrade cycle for 28 landfill gas (LFG) systems in San Bernardino County. Existing equipment was older and in need of upgrade — and did not have an easy-to-use HMI or data visualization.

Existing equipment was older and in need of upgrade — and did not have an easy-to-use HMI or data visualization. In addition to across-the-board equipment and cellular upgrades, Corso and SCS implemented an Ignition 8 gateway and the Ignition Perspective module. When the process began, 8 was in Beta. As Corso and SCS got closer to the project deadline, the nightly builds improved to the point of adding critical functionality on trends and graphs to meet the County’s major deliverables.

A unique part of this project was the requirement that the information be easily accessed online (mobile or desktop) without the use of Java, which made Ignition 8 the perfect choice. SCS Engineers offers an Ignition gateway to its end users in a cloud environment. Using a hub and spoke model with an Ignition Edge Gateway onsite and connecting with the EAM module, Corso and SCS were able to offer a complete enterprise solution.

Perspective played a major role in achieving buy-in and successfully launching the product. The mandate was clear: there is a need for a flexible architecture that allows visualization natively in HTML 5. Not only did Perspective allow Corso and SCS to take all of the normal components of a typical project, it also allowed embedding of Pix4D maps inside the web project.

SCS uses aerial data to compose topographic mapping, 2D images, 3D renderings, GIS, thermal, near-infrared (NIR), and methane leak detection for various waste facilities. After flying the San Timoteo Landfill, uploading the imagery, and mapping the facility, SCS and Corso were able to embed both the 2D images and 3D rendering into Perspective. Additionally, the team was able to take those rendered images and apply them into a Microsoft HoloLens VR headset, which allows decision-makers at San Bernardino County to “walk the site” from their offices.

Landfill executives and operators can now view the site remotely from any device, anywhere. The IT people are happy they don’t have to worry about Java on their system. And the necessary internal and regulatory reports are now completed automatically. Prior to implementing Perspective on the system, these reports were filled out by hand. Now the reports are automatically generated, pulling data from the system, reducing O&M costs and diminishing human error. Another big upgrade for the County is the notification of malfunctions via alarms. The ability to troubleshoot problems remotely is another big plus.

After the presentation of the pilot with Ignition 8 and the Perspective module, there was tremendous positive feedback. Corso and SCS have moved on to rolling out similar solutions to the other San Bernardino County landfills. 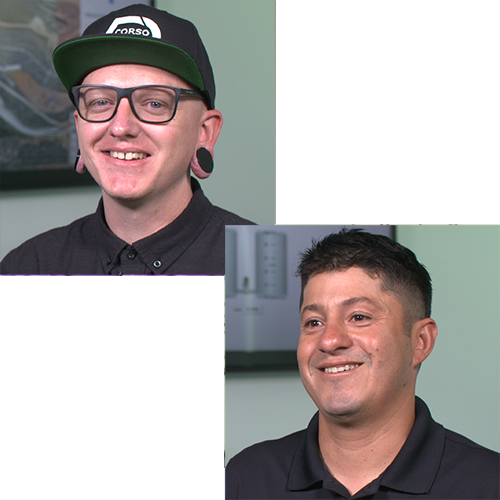 
John Gerbac is a senior systems engineer at Corso Systems. He is a Premier MES Engineer who has designed, developed, and integrated MES, SCADA, SPC, and various other application solutions in numerous industries including manufacturing, building automation, food & beverage, and mining. Taking a consultative approach to systems integration, he works with organizations to ensure all business needs are fulfilled within a project and helps to identify opportunities for improvement. John takes customer satisfaction seriously and aims to always exceed expectations.

Philip Carrillo is national director for SCS’s Remote Monitoring and Control (RMC). Phil is a systems integrator with 18 years of experience in the O&M of Landfill Gas (LFG) extraction and treatment systems. In the past three years, he has managed the design and installation of 126 SCS RMC systems for 78 clients.


Corso Systems is a system integration firm that uses a consultative approach to implement successful SCADA and MES systems, PLC programming, and information systems. Corso’s goal is to provide actionable feedback and results for end users while focusing on cutting edge technology and development. Regularly, Corso will work with other firms to provide world class solutions across multiple industries. SCS Engineers is an environmental consulting and contracting firm serving public and private clients across the nation and around the world. SCS Engineers specializes in the assessment, design, permitting, construction, operation and maintenance, and monitoring of sustainable environmental solutions and facilities.


The County of San Bernardino is within the greater Los Angeles area. With more than two million residents, it is the fifth-most populous county in California, and the 12th-most populous in the United States. With an area of 20,105 square miles, San Bernardino County is the largest county in the United States by area. The county is close to the size of West Virginia. It is larger than each of the nine smallest states, larger than the four smallest states combined, and larger than 70 sovereign nations.